Perhaps Jupiter’s most iconic feature is its Great Red Spot. A gigantic storm twice as big as Earth, the spot was first observed 300 years ago – and may have been churning long before that. Like a hurricane on Earth, the center is relatively calm, but farther out, the winds scream at 430 to 680 kilometers per hour (270 to 425 miles per hour).

WIDER THAN OUR ENTIRE PLANET.

The spot, whose main cloud layer is likely ammonia, appears to be an area of upwelling, in which clouds billow up from below. We’re still unsure as to the exact chemistry responsible for the spot’s brick-red color, as many Jovian storms boast a similar shade. Some other storms are white, however.

On Earth, hurricanes grow over oceans and dissipate soon after making landfall. But because Jupiter lacks a surface that slows or confines storms, Jovian winds and hurricanes last for centuries – if not longer. Sometimes Jupiter’s storms merge, combining to form even larger oval features. Bigger storms like the Great Red Spot gobble up smaller neighbors.

Although calling features like the spot “storms” is an accurate way to describe them, they are technically termed anticyclones (cyclones whirl in the other direction). For scientists, a “storm” usually refers to turbulent updrafts of material, which appear less frequently and produce lightning. 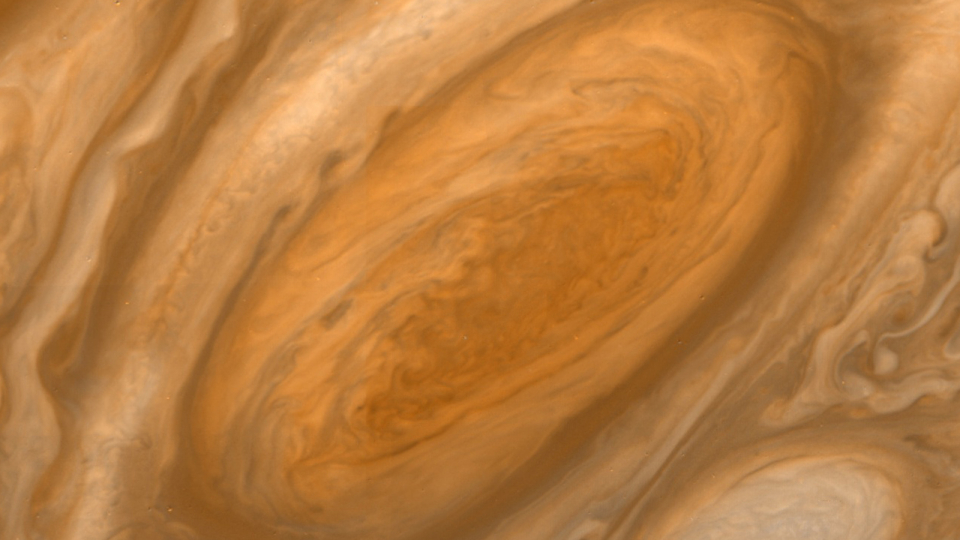