Even though it’s been more than 400 years since Galileo first pointed his telescope toward Jupiter, no one knows for sure what lies beneath its thick clouds. To find out, Juno will measure Jupiter’s magnetic and gravitational fields with unprecedented precision, revealing its inner structure and confirming whether or not there’s a solid core at the center.

Jupiter has been cooling ever since it formed, and inside, it’s been stirring up elements that were around when the solar system itself first formed. Studying the interior activity allows us to better understand how Jupiter has evolved from the gaseous glob it once was to the majestic planet we know today.

DOES JUPITER HAVE A SOLID CORE? HOW DOES IT CREATE THE LARGEST MAGNETIC FIELD IN THE SOLAR SYSTEM, APART FROM THE SUN?

Jupiter is a dynamic planet, with billowing clouds and swirling gases. But Juno won’t be able to dive deep into the clouds and gas, since the mounting pressure and heat would destroy the spacecraft. Instead, by measuring Jupiter’s gravitational and magnetic fields, Juno will allow scientists to do what no telescope has ever done – peer into the churning depths of the gas giant.

Gravity is caused by mass, and the nature of Jupiter’s gravitational field depends on how all of the stuff inside Jupiter is arranged. From its close orbit, Juno will feel even the tiniest shift caused by any variations in gravity, and these small displacements reveal details about Jupiter’s interior structure.

Precise measurements of Jupiter’s gravity will help answer a long-standing question: is there a solid core at the center, and if so, how big is it? Based on what we do know about Jupiter, we suspect that there is indeed a solid core, composed of heavy elements -such as carbon, nitrogen, and oxygen-and rock-forming elements – such as magnesium, silicon, and iron. Different theories as to how Jupiter formed make different predictions about the core’s size. If Juno can determine how big the core is, we can narrow down the possibilities.

Measuring Jupiter’s gravity will also reveal how the inner part of the planet rotates and how its gases swish around inside. The clouds that we see on the surface form bands that flow in alternating directions – west-ward and eastward. We don’t know whether these patterns are only surface deep or fundamentally related to what’s going on inside. One idea is that the interior consists of whirling cells, in which the gas rises and falls in a circular pattern. As a deeper cell rotates, it turns the one above it like a set of gears. The bands we see are just the outer edges of the top gears. Another hypothesis is that the entire planet rotates together, almost like a single, solid sphere.

Juno’s magnetometer will gauge Jupiter’s magnetic field more accurately than it’s ever been possible for any planet – including Earth. The engine behind Earth’s magnetic field is its rotating, molten core, but the crust and mantle slightly muffles the field, preventing us from taking detailed measurements. Jupiter, on the other hand, doesn’t have a solid surface, so Juno – due to its close orbit – can trace the magnetic field all the way down to its source. Not only will the spacecraft locate how deep the field begins, it might also be able to detect the motion of the fluids at that depth.

Juno will also learn what Jupiter’s made out of. For example, by seeing how much water is in the atmosphere, the spacecraft can determine how abundant is oxygen, which is expected to be one of Jupiter’s main ingredients. 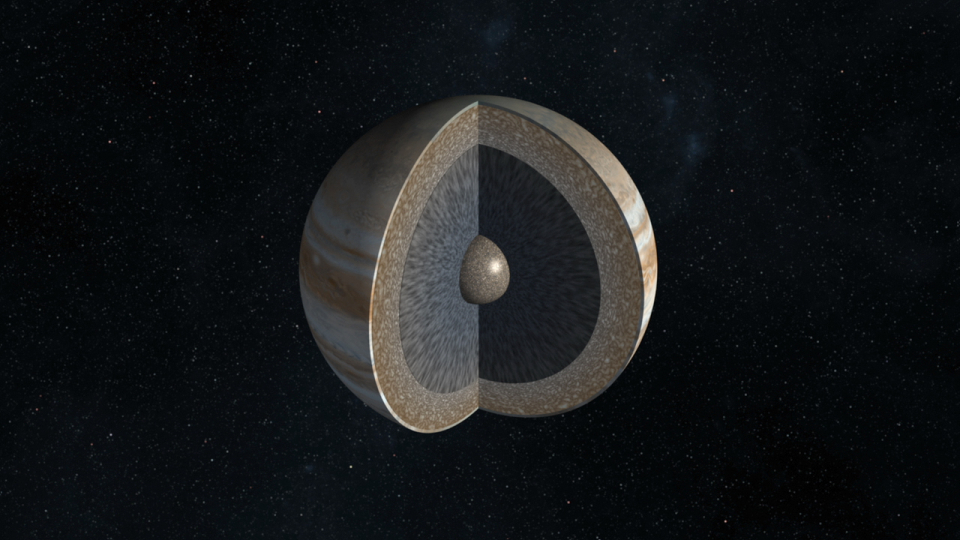