Looks like you're using an older browser. For the best experience possible, please upgrade your browser or download a modern browser.
d Back to all Threads

This thread is dedicated to the observation of circum polar cyclones.
Two major classes of observations are accessible for Juno, especially for JunoCam.
Those are short-term observations performed within one perijove pass, and long-term observations over the lifetime of Juno's exploration of Jupiter. 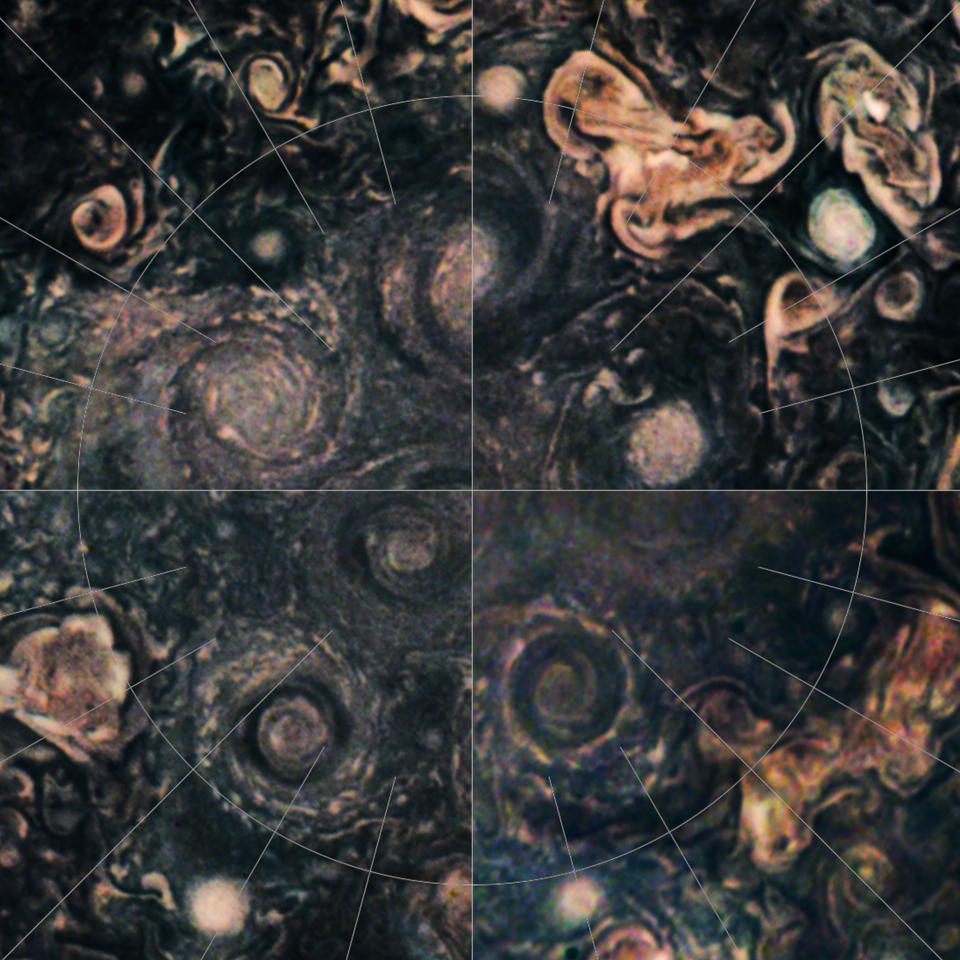 Within a short-term observation period, one of the major goals is an analysis of wind fields within and between the vortices around Jupiter's poles.
Morphological considerations as well as time-lapse animations are a first step of describing the short-term dynamics of the vortex patterns.
Animations can be used as a basis for more advanced data reduction methods. Example reduction goals are wind fields approximated by maps of vectors describing cloud feature motion.
Further reduced are vorticity maps, or maps about the position, size and type of vortices or jets.

Long-term observations include the evolution of the overall pattern of the circumpolar cyclones.
Since Juno's first observation of Jupiter's polar region, in JunoCam images, we see a south polar cyclone slightly displaced from the south pole.
This south polar cyclone is surrounded by five circumpolar cyclones. This pentagonal pattern oscillated a bit, but in the longer run it turned out to be astonishingly stable with respect to Jupiter's L3 coordinate system.
Astonishingly, since the surroundings of the CPCs appear to behave much more chaotically.

The north pole has been just behind the terminator on Jupiter's night side since the beginning of the mission. JunoCam has been able to observe eight circumpolar cyclones (CPCs) around the north pole.
JunoCam was able to identify parts of a pretty large anticyclone closer to the north pole than the CPCs during one of the perijoves. Towards a north polar cyclone JunoCam has only been able to detect vague hints.
These eight northern CPCs are forming an almost regular ditetragonal pattern. A ditetragon is like a regular octagon, except each second corner displaced radially by a common amount.
The north polar octagon turned out to be rather stable with respect to L3, too.

Objectives of long-term observations include the evolution of the morphology of the circum-polar cyclones, as well as the stability and oscillations of the polar and circumpolar vortices, especially the cyclones.
More advanced are time series describing the evolution of wind fields and vorticity maps in the long run.

Jupiter's polar vortex patters have not been anticipated.
Obvious physical questions are:
How could these polar vortex patterns form, and why are they so stable?
Why does the vortex structure differ from Saturn's, and why are even Jupiter's northern and southern CPC patterns different?
Juno's, and especially JunoCam's observations constrain future theoretical models.